The North American esports organization, FaZe Clan, enters the semi-finals of PGL Major Antwerp 2022 by brutally beating the NIP. From the first map FaZe has everything under control, although they choked a bit by losing 5 rounds continuously in their own chosen map, Nuke. However, they picked up the grip and won the Nuke map by only giving 5 more rounds compared to winning 16 rounds.

In the next map, in Overpass (chosen by NIP), the same NIP choked a bit in the first few rounds, but they also tightened their grip and control over the match. Though it was still not easy for the NIP to win the Overpass, NIP's hampus supported the team single-handedly in all rounds and basically in all 3 maps. But you can't win the CS: GO's biggest tournament alone. REZ is the oldest and most experienced player in the team NIP but was not able to completely show his true skills against FaZe.

The third map was in the Inferno; apart from a few minutes in the entire match, FaZe had everything in their control. They were brutely killing each of the NIP's roster players. No matter how much they or hampus can try to carry the team.

hampus has the highest ADR in this match, even five points more than FaZe's ropz. On the other side, FaZe was owing everything, and with the aggression of ropz and karrigan, borky, rain, and Twistzz, all FaZe roster players contributed their part and did some unique clutches, especially karrigan and borky.

The stats of this playoff match between FaZe and NIP at PGL Major Antwerp are as follows:

NIP posted on twitter after the match, "Our major journey ends today. This is still a young team and we are confident that many more chances for a trophy will come! Thank you all for your continued support, ninjas." 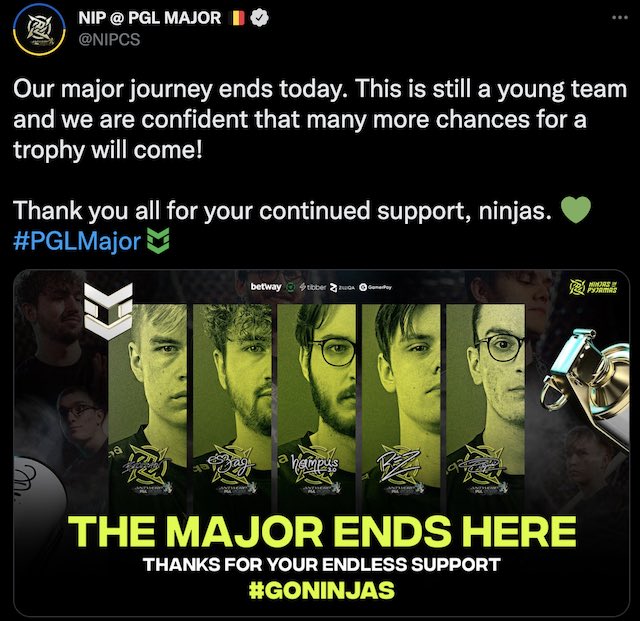