It's the Champions stage and the second match of the first day, followed by the first match between NIP and FaZe Clan in the quater-finals of the biggest CS:GO tournament. Team Spirit and FURIA will face off in the quarterfinals of the PGL Major Antwerp today. Here's a look at the stats and lineup comparison for the two teams. Team Spirit comes into this match as the favorites, with a strong performance in the Legends Stage. They finished first in legends stage matches with a Round Difference of +20 and a Buchholz Score of 3. Also, Spirit was the first team to qualify for the PGL Major Antwerp's quarterfinals.

Whereas FURIA was the last one to finish for the quarter-finals. However, the Brazilian team is also performing well. They won the last match against G2 Esports in the Legends stage and also wiped G2's only hope to qualify for the PGL Major Playoffs.

The most recent match between Team Spirit and FURIA was played on May 14th, 2022, where Team Spirit won the match by 16-12 on Nuke. 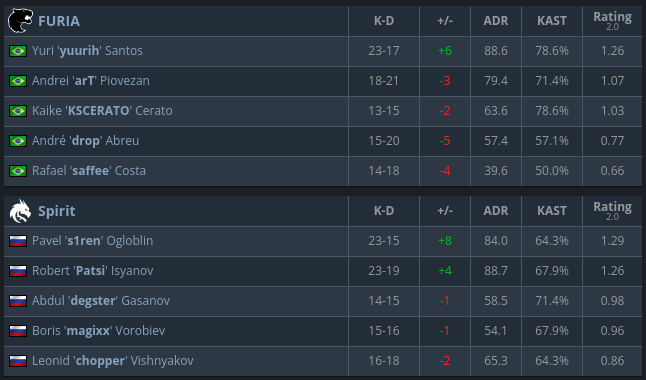 The table below includes both Spirit and FURIA's performance based on the maps they played in the past three months. Before their PGL Major Antwerp's quarterfinal match on May 19, 2022.

Looking at the map stats, FURIA is strong on Inferno and Train, while Team Spirit is strong on Nuke. Dust2, which will be the first map, is a bit of a wildcard.